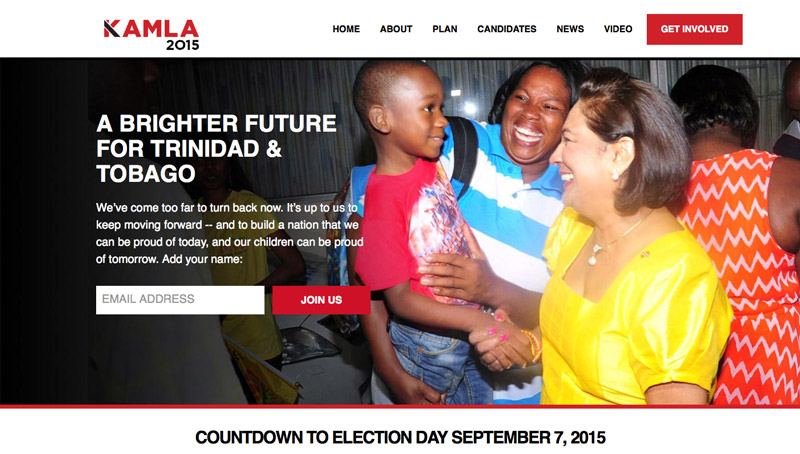 As the election race heats up, let’s dissect the strategy and tactics used in the People’s Partnership re-election campaign. Political campaigns are interesting because they operate at an intersection of personal branding, lofty, sometimes-intangible ideals and the realities of negative campaigning.

Kamla 2015 digital campaign is largely comprehensive and well-executed. Its weakness may be that it is too well-scripted, ignoring real-time and difficult issues thereby losing some of its authenticity or ‘realness,’ being a bit disconnected from realities happening on the ground.

Communications Strategy without the Partnership

It is perhaps telling, that the political alliance, People’s Partnership is, so far, absent from most of Kamla 2015’s branding and communications. Much like political campaigns in the US, Kamla 2015, the personal brand, forms the main campaign imagery.

We are exhorted to ‘vote for Kamla’ despite the fact that in T&T we don’t directly vote in a Prime Minister. It may be that the People’s Partnership is too fragmented a brand. In the UK, the election-period branding is the opposite, focus is put on the party. See the campaign for the UK’s 2015 election winners, Conservative party.

A big chunk of the online messaging has focused, again much like US campaigns, on The Issues. Track records and results, plans and pledges form the backbone of the digital content. An offshoot of the main campaign is devoted to negative campaigning targeting the Leader of the Opposition. This secondary offshoot does not bear any of the imagery associated with the primary campaign.

The Prime Minister’s team has always had a strong flair of publicity and imagery. As a result there’s a lot of footage of the PM engaging with the public, that footage is put to great use now in ads and social media imagery.

Much like her digital campaign of 2010, online ads form a large part of the digital campaign. Using Google’s ubiquitous advertising platform – AdWords, the PM’s advertisers can target web users based on several conditions – including geographic location. These Google ads can appear anywhere (SmartWatch, SmartPhone, tablet, SmartTV, within Mobile apps/games) and at any time.

Using the classical model of persuasive argument the ads are divided into themes designed to appeal to emotion (pathos), logic (logos) and ethics (ethos). Emotive ads allude to T&T’s shared values of racial parity and collective national achievement. Logical ads lay out a plan for the future called 20 Pledges for 2020. Ethical ads suggest that, based on her track record, the PM will continue leading us into the light.

Online video is very powerful. 80% of website visitors recall a video ad on a website they visited in the past 30 days. Humans are extremely visually attuned, because of this, futurists have speculated that video is will account for 69% of all consumer internet traffic by 2017.

As reported in the local media, the electorate received unsolicited email and mobile messages from the Kamla 2015 team. In the world of digital marketing, the most effective way to target your consumers is to grow your email marketing list organically, ie. from scratch. The receiver’s reaction to unsolicited email is generally negative. This negativity may have an impact on your communication goals.

It’s evident that the Kamla 2015 marketing team, holds Email Marketing in high regard. The main Call to Action on the www.kamla2015.com website is to sign up for email notifications. Again, this is straight out of the US-based Obama ’08 campaign playbook. In 2008, Obama’s marketing team pioneered the technique of grassroots organisation using online media. Obama ’08 was described as the first and most successful online marketing campaign in history.

Eschewing political party profiles and channels, the campaigners have been busy on Kamla-centric Facebook, Twitter, Instagram and YouTube profiles. Supporting social media profiles are also used. They echo and enlarge the main profiles’ messaging, playing on the concept of social proof.

The marketing team is using images heavily in their marketing strategy. Images are highly effective as visuals are processed 60,000X faster in the brain than text. Social media content featuring images nets the highest engagement rate. In mash-up of image and engagement, the team have put together the Kamla Alphabet to start a viral trend.

In 2010, the campaign team did not launch a formal website. Traffic to the kamla.tt domain name was redirected to the PM’s official Facebook fan page. By contrast in 2015, we now have an abundance of websites devoted to the campaign – kamla2015.tt, kamlaview.com, nationalconversation.tt and norowley.com.

The website is used build a relationship with supporters via email marketing. It describes the PM sympathetically, describing her humble beginnings and provides evidence of a strong work ethic and a commitment to self-improvement. It lays out her plans for the country using the inverted triangle technique and provides viewers with the tools to quickly share future plans for the country.

One might say that the digital campaign is well-coordinated and well-executed. We observed though, that the campaign lacked indigenous character. It makes no use of the T&T cultural traditions of verbal cut-and-thrust which typically characterise local elections.

With a campaign that seemed tightly scripted there were few instances of developments (assassination controversy or neemakharam accusations) being addressed in ‘real-time.’ There are no responses to comments left on Facebook, there are no retweets of supporters, no likes on supportive Instagram images, and commenting has been disabled for certain videos on YouTube.

Absent too is any acknowledgement of the detractors among the populace and their concerns. The party’s critics are ignored and the campaign content does not addresses uncomfortable or difficult ethical issues.

An integral part of utilising digital media is engagement. Engagement requires dialogue, dialogue a two-way, back and forth conversation.